11:41 PM Infotechmaestro 0 Trending
A+ A-
Print Email
Google recently announced its latest big algorithm change, Hummingbird, which was released about a month ago. Over 90% of worldwide searches are currently affected. Google announced its release is due to a need for more accurate search results. Hummingbird draws up search results based on queries scanned for concepts and meaning, not just words. Read on to see what other changes Hummingbird brings.

What’s a “search algorithm?”
That’s a technical term for what you can think of as a recipe that Google uses to sort through the billions of web pages and other information it has, in order to return what it believes are the best answers.

What’s “Hummingbird?”
It’s the name of the new search algorithm that Google is using, one that Google says should return better results.

The most exciting change is Hummingbird’s ‘Semantic search’ – in other words, search results will now be ranked on more natural and intelligent search requests. SEO isn’t just about keywords anymore – writers need to pay more attention to intent. Keyword stuffing is even more frowned upon as Google’s search engine gathers even more information before issuing results. A user’s intent, location, social connections and even previous searches can all be used to draw up search results. 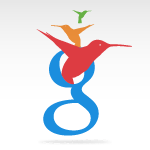 It’s no accident that this algorithm is heavy on big mobile improvements. A few weeks ago we told you how important it is to go mobile with your site, and Hummingbird is a perfect example of why. For starters, Hummingbird brings with it a new look and feel, cleaning up your smartphone or tablet. In just a few short weeks users will be able to download a newer version of Google search, allowing for voice commands. You can ask Google to remind you to buy olive oil at a specific store, or ask it to show you Impressionist Era artists. Google is aiming to answer even harder questions.


PageRank is not a thing of the past and still holds its original meaning and values. No. PageRank is one of over 200 major “ingredients” that go into the Hummingbird recipe. In fact, those of you who reorganized according to Penguin’s debut don’t need to do a whole lot. Penguin was a harsh reality check to those websites solely relying on keywords and many sites paid a heavy price. Because so many sites adjusted to Penguin’s criteria, not many sites have seen a huge decrease in traffic or a decrease in PageRank due to Hummingbird.

What’s the moral of the story?
The emphasis remains on quality content. Buffing up your site with keywords won’t help, but instead will harm. Though as stated above, if you’ve revamped to flow with Penguin, your site is probably in good hands.Almost certainly not. While we can’t say that Google’s gotten better, we do know that Hummingbird — if it has indeed been used for the past month — hasn’t sparked any wave of consumers complaining that Google’s results suddenly got bad. People complain when things get worse; they generally don’t notice when things improve.

Have you noticed a change in your site’s search results?