7:43 AM Infotechmaestro 0 Tech News
A+ A-
Print Email
MANILA, Philippines  Filipinos can now chill and binge-watch their favorite shows and movies on Netflix, as the streaming video-on-demand service has expanded to 130 new countries, including the Philippines. – At the Consumer Electronics Show  (CES 2016) in Las Vegas on Wednesday, January 6 (Thursday, January 7), video-streaming service Netflix announced that it was launching in a host of new, additional countries, including the Philippines.

Netflix CEO Reed Hastings said at the end of the presentation at CES that he was "delighted to announce that while we have been here on stage at CES, we switched Netflix in Azerbaijan, in Vietnam, in India, in Nigeria, in Poland, in Russia, in Saudi Arabia, in Singapore, in South Korea, in Turkey, in Indonesia, and in 130 new countries."

Netflix also added Arabic, Korean, and Simplified and Traditional Chinese to the 17 languages it already supports.

Netflix in the Philippines can be accessed at https://www.netflix.com/ph/ and will have 3 plans available, with a minimum monthly subscription plan of P370 ($8) for the Basic plan. If you want to try it out first without committing to paying its fee, Netflix is offering a one-month free subscription, which can be availed until February 6. 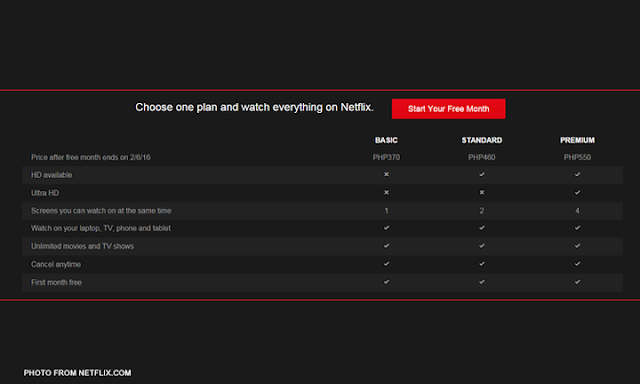 Standard and Premium plans will also be available for P460 ($10) and P550 ($12) which add additional screens for viewing at once, as well as the addition of HD and Ultra HD capabilities.


NOTE: This required fast Internet if you want in Ultra HD.